Portions of the upper body and entire lower-half of this otherwise more than a decade old battled OOM-series battle droid have been covered with fresh dark-blue paint. On closer inspection, it becomes obvious that some of its parts have been replaced more recently.

Blaster Happy (Software): The combat-related droid tends to shoot first and listen to orders later. It also might continue to fire at a defeated enemy “Just to make sure.”

This droid was found disactivated onboard The Defiant Star. 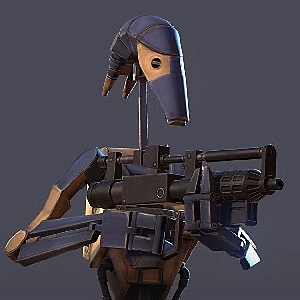