“What do we have here! Mynocks in my abode! And with them another Jedi! How delectable… I think there is no better opportunity to demonstrate the deadly efficacy of my new military droids—courtesy of our imperial friends.”

Ni’maani and our heroes decide to join forces. The beautiful Twi’lek shares some dire news about Ludra Tryles, left between life and death following a violent encounter with a Vora Synn, a rogue Jedi hunting Vasha. Our heroes explain to Ni’maani that they intend to break into Zulos the Hutt‘s House of Sins to liberate the Jedi Knight offered for auction. The Twi’lek agrees to take an active part in this endeavor.

Brev Fresk’lya provides Eshu, Vasha et Zuur with a map to the House of Sins, along with working access codes. Meanwhile, KZ3R meets up with a Gran pilot , securing transportation out of world for the group. Everything seems now perfectly set for the daring rescue attempt.

Our heroes successfully infiltrate the House of Sins’ lower levels and reach a large octagon-shaped open area identified on their map as the location where the Jedi should be located, defeating a few battle droids along the way. As they endeavor to free a lone female captive held in a force cage in the middle of the darkened oversized room, our heroes hear the projected voice of Zulos the Hutt who seems to address them directly. The room is suddenly illuminated, revealing around them what appears to be an arena floor. A few seconds later, two droideka battle droids engage the female Jedi and our heroes… 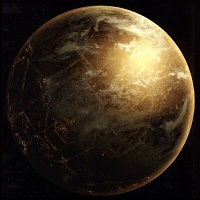 While Vasha Stormtamer is desperately trying to elude his numerous pursuers through the Smuggler’s Moon‘s labyrinthine streets and alleys, KZ3R, Zuur Durjja and Eshu Tahal, learn of Kalor Salaban III’s treachery from Ni’maani. They retrieve compromising information on Soleil from the Sun’s Glory’s computer, leaving the confines of the grounded ship in quite a spectacular fashion—by activating an escape pod.

Our heroes successfully escape their former employer’s minions and regroup to a secret location provided by the Bothan spy Brev Fresk’lya to plan their future course of action.

Episode VI - Another Wretched Hive of Scum and Villainy

KZ3R arranges a meeting between his associates and a mysterious entity. Eshu Tahal and Zuur Durjja agrees to accompany their droid ally to the meeting place. Meanwhile, Vasha Stormtamer will escort the crime lord Kalor Salaban III and the Twi’lek Ni’maani to the Auction.

On the steps of Zulos Anjiliac Preor‘s House of Sins, Vasha is ambushed by Keees Preku and a small contingent of Stormtroopers. The young jedi decides to run. Ni’maani discretely helps Vasha escape, diverting the attention of his pursuers elsewhere.

Meanwhile, Eshu, KZ3R and Zuur meet up with an enthusiastic Bothan information broker who offers them assistance in exchange of incriminating data proving Soleil’s involvement in the Battle of Dreighton debacle of a year ago. 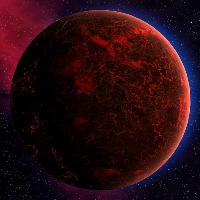 Zuur Durjja and Vasha Stormtamer are interviewed by Ludra Tryles who later introduce them to her master Soleil. They strike a bargain with The Sky Citadel’s criminal overlord. In exchange for transportation outside the Aeten system, they are to assist the droid KZ3R into retrieving a small fortune in rare crystals from the orbital station’s command center. In so doing, our heroes should also be able to rescue Vasha’s Jedi master from the Governor’s holding cells. The newest (less recognisable and most expendable) recruit in Soleil’s organization, Eshu Tahal, is chosen to oversee this daring enterprise.

After few hours of planning, our heroes infiltrate the Imperial Enclave of the Sky Citadel, using forged code cylinders. After successfully passing through several checkpoints manned by B1 battle droids, the party split up. Vasha, wearing a stolen military uniform, and Durjja, in Clone Trooper armor, are to descend to the lower levels toward the imperial holding cells, while Eshu, also in Clone Trooper amor, and KZ3R, are to progress upward to the Sky Citadel’s command center.

Vasha and Durjja vanquish a military officer and several B2 battle droids, freeing a dozen prisoners (none of them Jedi), as the droid MY-0K makes an unexpected apparition through a small air vent.

Meanwhile, Eshu and KZ3R successfully infiltrate the command center. KZ3R is about to access the mainframe computer, when an alarm starts to resonate throughout the imperial base…

“The New Order of peace has triumphed over the shadowy secrecy of shameful magicians. The direction of our course is clear. I will lead the Empire to glories beyond imagining.”

Following their successful heist, Keees Preku introduces Eshu Tahal to Ludra Tryles. The former mercenary commander is impressed by the young soldier. After taking possession of KZ3R, she invites Eshu to the Sky Palace Casino, where he is to meet with her notorious leader Soleil.

Meanwhile, The Defiant Star arrives in the Aeten system after rendezvousing with a Victory I Star Destroyer. Kieran Tasiri reveals the nature of his mission to Vasha Stormtamer and Zuur Durjja, before docking on the Sky Citadel orbital station. Leaving his Padawan behind, the Jedi Master boards the space station, proceeding without delay toward its command center—accompanied by MY-0K and a small contingent of clone troopers—in order to apprehend Leran Zarin.

Shortly after the Jedi Master’s departure, Vasha and Durja elect to explore the Sky Citadel. As they disembark The Defiant Star, they are unexpectedly attacked by clone troopers in charge of guarding the docking bay. Our heroes make a quick escape, losing their pursuers within the confines of the overpopulated space station.

Palpatine’s Declaration of a New Order resonates throughout the Sky Citadel.

Hunted and in desperate need of allies, Vasha and Durja proceed to locate the mysterious Soleil, one of Kieran Tasiri’s former associate.

Episode I - A More Civilized Age 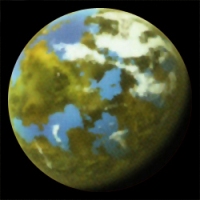 After a brief excursion on Agamar, jedi Master Kieran Tasiri, along with his loyal droid companion MY-0K, introduces the young Zabrak scout Zuur Durjja to his Padawan, Vasha Stormtamer. They immediately board The Defiant Star, for the jedi Master must travel to an undisclosed star system in order to fulfill a secret mission from the Jedi Council.

Searching for his former commanding officer, Eshu Tahal boards The Sky Citadel space station orbiting Aeten II. He is soon reunited with a former cell mate, the Rodian Keees Preku, who offers him a job. Together they are to steal a prototype protocol droid for the benefit of a local criminal organization.

STAR WARS: A FLICKER OF HOPE

A Flicker of Hope's Opening Crawl 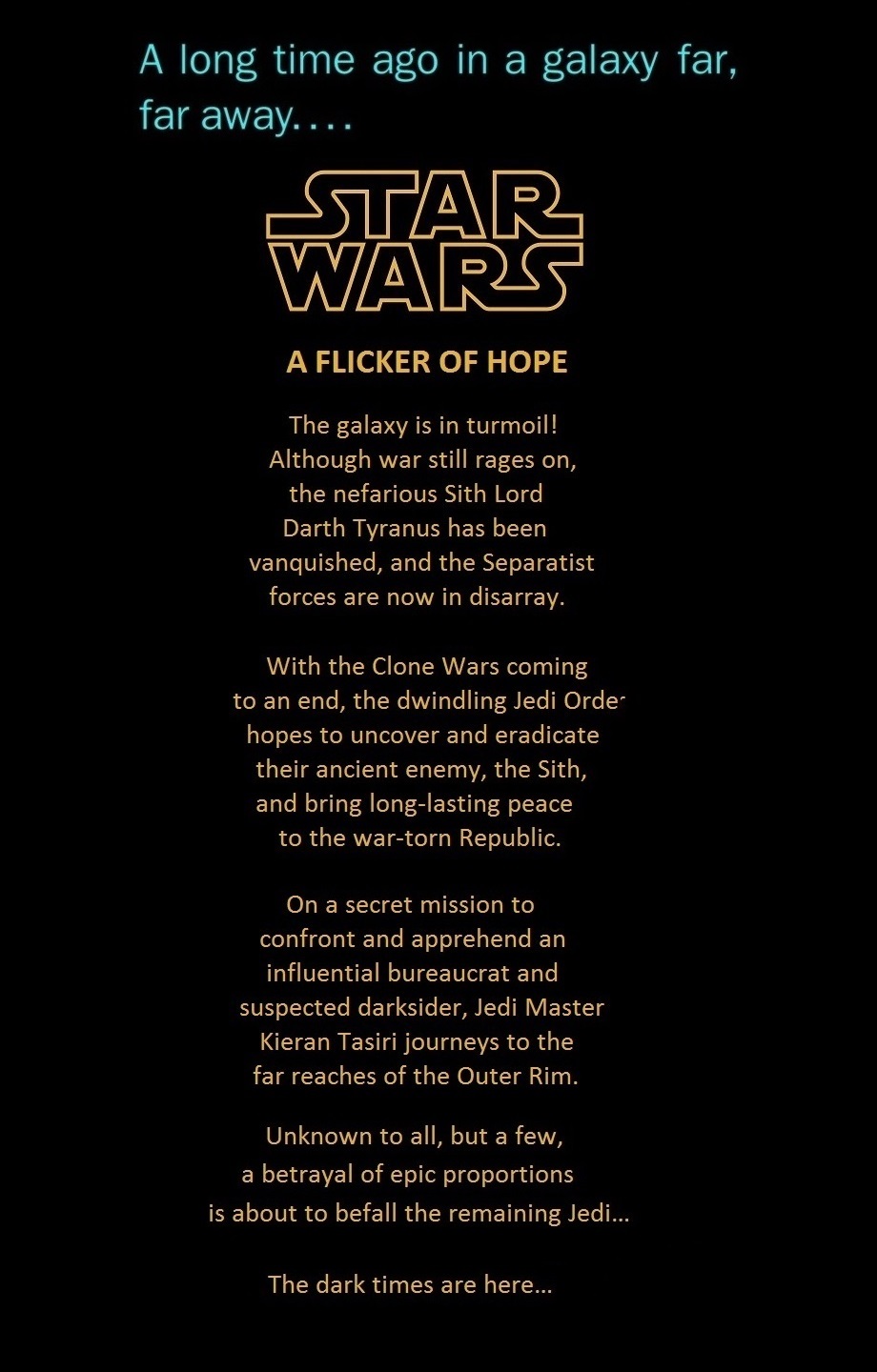 An Insider's Guide to A Flicker of Hope...