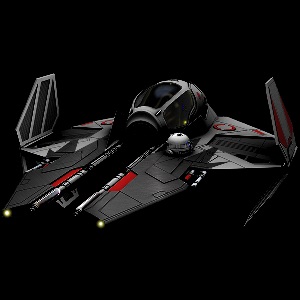 Unless a specific mission requires her to pilot a different ship (i.e. the same type of starfighter than her squadron), Ciana Zarin favors this personalized Eta-2 Actis Interceptor.

Ciana Zarin leads from the front, using her starfighter superior speed to make an attack run in strike formation before the rest of the squadron joins up with her. Then she uses Battle Meditation to bolster her allies, staying in close proximity to them, and the intercept maneuver to neutralize the most dangerous enemy starfighter, locking it into a dogfight. She does not hesitate to use the battle strike and shatterpoint Force powers to supplement her attacks.