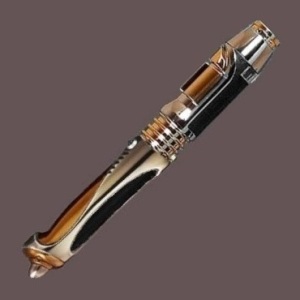 A dual-phase lightsaber, with an utilitarian, yet elegant hilt, elaborately decorated with electrum detailing. Its rare sigil crystal emits a strong and bright blade of yellow-brown, almost of a gold, color. This lightsaber was additionally customized to integrate a beckon call, linked to The Defiant Star’s slave circuitry.

Because of the unusual lightsaber crystal it bears, a character attuned to this weapon receives a +2 Force bonus to damage rolls instead of the attack bonus normally awarded.

While already known as a wielder of the unconventional dual-phase lightsaber, Kieran Tasiri was awarded this electrum-detailed lightsaber, along with his first Padawan Vora Synn, when he first achieved the rank of Jedi Master. The additions of the rare sigil crystal and beckon call system, came later, during his years of self-imposed exile from the Order.

The Black Dove cane into possession of her former mentor’s lightsaber, after confronting Leran Zarin, the Imperial Governor of Aeten II.