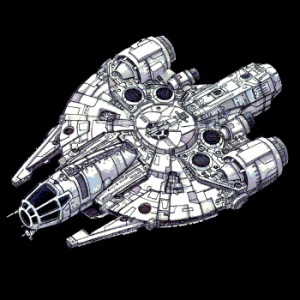 This heavily modified light freighter’s hull carries the signs of more than a decade of abuses, but the vessel was nonetheless well maintained by its previous owners. It is surprisingly battle ready, bearing descent shields and being outfitted with quad-laser turret and a pair of ion canons.

Even though the Defiant Star is equipped with advanced slave circuits and can thus be easily manned by a single person, it still hold a co-pilot station in the cockpit if needed. The slave circuits benefit from the recall features that can be notably activated with beckon call.

The Defiant Star was also customized with more spacious lodging accommodations for passengers and crew, exchanging the added comfort for the capacity to hold less passengers than the stock model.

Jedi Master Kieran Tasiri acquired this vessel at a bargain, shortly after the Baltizaar debacle. In the following decade, the Prodigal Jedi had ample opportunity to customize the small space transport to his specific needs. Among the first accessories installed were top of the line slave circuits and recall circuits systems, in order to be able to fly his ship solo. Before the Clone Wars, he used to travel with a modified 4th-degree combat droid to act as gunner on his more dangerous runs. The droid was however destroyed when he confonted his renegade apprentice, the Black Dove Vora Synn.