After receiving an answer from Lowpirr, Eshu, KZ3R, Vasha and Zuur leave the Last Gambit to meet with him. At the cantina, the tall nervous Wookiee can be easily picked out from the other patrons. Once he recognises Zuur and Vasha, Lowpirr rises from his bar stool and signals the group to follow.

The Wookiee leads our heroes through the Arcology up to the upmost residential levels of the massive structure. Eventually, he stops in front of a doorway, knocking two times, then one time, then three times, before opening the door and signaling the others to enter the before him.

Our heroes venture warily into a luxurious apartment. The Wookiee closes the door behnd them and signals them to continue toward the living room. Lowpirr remains behind. Shortly afterward, Vora Synn makes her entrance along with MY-0K. The Black Dove eventually agrees to let Vasha take possession of the droid, who eagerly floats right next to Zuur. After Vora Synn expresses the desire to talk more privately with Vasha, the rest of the group decide to return to the ship, leaving both Jedi behind.

Eshu, KZ3R, Zuur, Lowpirr and Mynock reaches the lower levels of the tower when our heroes receive a distress call from Yen Prip. The pilot explains that the ship is being surrounded by a menacing group of Gands, and is being locked in place by some sort of device preventing take off. The comlink communication is suddenly cut off.

A few moments later, Ni’maani uses the Force to warn Zuur that she is herself in trouble… 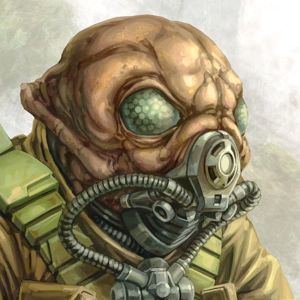 S03E06 - Once Upon a Time in Bakura, Part III The Final Showdown

S03E05 - Once Upon a Time in Bakura, Part II Attack of the Gands